Welcome back to Clickbait Boyfriend, Talk This’s foremost Kingdom Hearts blog! Summer is coming up, and with it, more time to update Clickbait Boyfriend on a regular basis!
I’m particularly excited about this entry, because it features some of the first Clickbait Boyfriend mini-vlog content! Not only will you get to read Josh’s choicest one-liners, but you’ll get a glimpse into his rants and hot takes on video as well! They’ll all be embedded into our posts, but you can also follow our playlist on YouTube to never miss a CBB vlog. While you’re there, subscribe while you’re at
(Behind on your Clickbait Boyfriend? Catch up here!)

-on the Pirates of the Caribbean world

Pirates of the Caribbean (or Port Royal, if we’re being technical) is one of the more controversial worlds in the Kingdom Hearts universe. Josh had a lot of thoughts about this, so I’ll let him take it away:

“Those are like the AT ATs from Star Wars.”

I admit it: I haven’t really kept up with Star Wars over the past few years. I’ve watched the original trilogy more than once, but it’s probably been seven or eight years. In my defense, I don’t catch a lot of movies in general, so it’s nothing personal against the franchise! All this to say, Josh almost left me when I didn’t know what AT ATs were.

The real question is, now that Star Wars is a Disney property, will Kingdom Hearts 3‘s gummi ship levels be full of Starfighters and Millennium Falcons?

“I’m going to be very mad if this isn’t a rip off of the film. I want Orlando Bloom.”

As much as I was angry in our last edition about how the Land of Dragons does not really follow the story of Mulan, as a rule, the Kingdom Hearts worlds do stay pretty close to the plot of the movie. Sadly for Josh, Orlando Bloom does not reprise his role for the game, either vocally or…

“He looks a little worse for the wear there!”

…with his likeness. As a reminder, Kingdom Hearts 2 came out in 2005, which believe it or not, is thirteen years ago. My running aesthetic theory is that the more stylized a visual, the longer a piece of art can hold up.  We’re playing the PS3 2.5 ReMix, so take this with a grain of salt, but I think that as a whole, the graphics still look pretty good. Port Royal is a notable exception. Jack Sparrow looks pretty good, Elizabeth Turner is acceptable, but Will Turner is…not looking his best. Orlando B. should be moderately offended.

“Are they not a little weirded out by the giant dog bear thing?”

Given that most of the residents of Port Royal don’t quite look like fully-rendered humans, maybe they’re a little more accepting of Giant Dog Bear Things like Goofy. Pirates will take anyone as long as they can wield a tiny dinner plate of shield.

Look at this diverse team. This is what the future looks like, y’all.

Yeah, Port Royal is definitely not a visual highlight of the game.

“Let’s shake it up and put some gold coins the background! So colorful!”

“This is around the time Guitar Hero was coming out…they were like ‘okay, we need to get on the bandwagon.'”

-on going with the (gaming) flow

It’s such a shame Guitar Hero fizzled out, because what a fun five years of parties that was. Josh is a little wrong with is timeline though, because the original Guitar Hero came out only a month before Kingdom Hearts 2, so there was no bandwagon to jump on! The developers have only themselves to blame for turning Atlantica into a weird rhythm game.

Speaking of Kingdom Hearts meets Guitar Hero, here’s a Clickbait Boyfriend approved metal cover of “Sanctuary” which also doubles as major GHIII nostalgia. Now if only we could get KHIII…

“Swim This Way” is no “Under the Sea,” but it’s almost catchier because it’s so simple and repetitive. Would you believe that it’s written by a couple of fairly prolific video game composers, as well as Kingdom Hearts‘ resident songstress Utada Hikaru. Maybe not her finest work. I just mentioned the song to Clickbait Boyfriend, and he launched into another rant about it.

The reviews on Amazon for the soundtrack do say that the original Japanese version is better, but I’m skeptical.

“Doesn’t he have a world to save?”

-on the theory of relativity

Yeah, it doesn’t really make sense how Sora just runs around taking his time visiting his friends. I think at this point, we have to grant that time works differently on each world, otherwise Sora’s underwater band practice would be kind of selfish, don’t you think? Then again, who am I to stop a fourteen-year-old boy from indulging in some sweet sweet musical theatre? Welcome to the industry, child.

“Agrabah’s been doing some urban planning since I’ve been gone!”

Exhibit B of the Kingdom Hearts Theory of Relativity. Jasmine (because let’s be real, Aladdin has no bureaucratic or leadership experience) has gotten some s#!t done while Sora was napping. I suppose it’s easier to completely reorganized your infrastructure when you’ve got an all-powerful genie as your head contractor.

“Damn, Sora can get some mad air!”

Who was the special soul at Disney in the mid-aughts who was so obsessed with skateboarding?

-on the Kingdom Hearts Hotness Continuum?

There’s since been an okay remake, but yeah, Tron is not exactly a Disney classic. My theory is that someone made a character design for robo-Sora, Donald, and Goofy, everyone thought they were pretty slick, and they had to dig for a world where that would make sense.

They do make pretty cute figurines

“Even in 2005, you’d have to be a thirty-year-old to have any memories or emotional attachment to Tron.”

-on references that predate millennials

Josh was pretty disappointed with the levels in this edition. Check out more of his thoughts:

“Mickey is such a gaslighter.”

It’s true, throughout the game Mickey shows up for a minute, gives you a breadcrumb of information, and then disappears again. You’re always chasing after him, but you can never quite catch him. He’s just constantly manipulating Sora and the gang to do his bidding so he can run all around the galaxy doing…what, exactly? Textbook gaslighting right there. Now, Clickbait Boyfriend, why exactly do you know what gaslighting is…? Maybe that question is outside of the scope of a Kingdom Hearts blog. 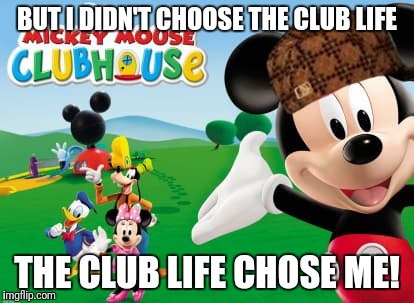 “This is the single most frustrating thing I’ve done in Kingdom Hearts.”

Sora’s only fourteen and he seems to have grown up on a pre-industrial island (minus a banging sneaker industry), so it makes sense that his driving skills would be subpar. Now, is the Tron racing difficult because it’s taking Sora’s lack of experience into account (like Silent Hill’s fighting mechanics, which we discussed on the podcast this week), or is Josh just bad at the game? I guess we’ll never know. Maybe he should have switched to…drive form.

“He’s kinda like me: blond, plays guitar, crippling self doubt>”

I guess we’re going to have to rename Demyx to Soxjh. Or Hoxjs. Or…man, coming up with these names is harder than I thought!

Oh right, I guess he would also have to lose his heart first or something.

“Did this game really just kill off Goofy?”

This is one of the most mystifying moments of Kingdom Hearts 2. It looked like things were about to get dark, and this is a series that knows its way around *darkness*. Fortunately, Goofy’s just going to have a major goose egg. But what the heck, Square?

For those who don’t remember the scene, here’s a reenactment, featuring correct gestures and facial expressions and everything:

“Who would win? One wingy boy or one key boy?”

This is as good a time as ever for a throwback to some OG Kingdom Hearts video content. Here’s a battle between one wingy (angel) boy and one key boy. Who will win?