It’s been quite a journey for Clickbait Boyfriend! He’s made it through Kingdom Hearts. He demolished Kingdom Hearts 2. He’s finished Terra, Ventus, and now all that remains is Aqua. I know what you’re thinking: “What about Coded, and 358/2, and Dream Drop Distance, and Back Cover, and–” shush, reader. Let’s not overwhelm the guy. A new adventure (about half of which we’ve already seen from other perspectives) begins today!

(Not up-to-date on Clickbait Boyfriend’s adventures? You can catch up here.)

“If I hadn’t been talking over that moment when I first played Ventus, it would have been such a revelation. I would have screamed.”

-on the benefits of a third viewing

Sometimes Clickbait Boyfriend gets so wrapped up in thinking up witticisms, he misses key plot moments. In this case, he’s referring to the reveal of Xehanort, but who knows what else he’s snarked over?

No way this guy is evil.

“Someone raised their hand: Bald with a goatee.”

-on the character design meeting for Xehanort

A classic villain look. If it ain’t broke, don’t fix it.

“Jesse McCartney probably knows deep secrets about Kingdom Hearts that no one else knows.”

There’s a lot going on in Kingdom Hearts about hearts and minds and bodies and data, but where does the Beautiful Soul come in?

“It’s so refreshing to have a character that moves, instead of Terra who lumbers.”

-on the grace of a glass cannon

As Emma explained it to me a few months ago, Terra is a tank, and Aqua is a glass cannon. Will CBB miss the old lumber when he’s getting two-hit-KO-ed by Unversed? Time will tell.

You can tell he lumbers from just a single step

“I’m ready for my knowledge.”

-on the long-awaited privileges of Keyblade mastery

Clickbait Boyfriend has been waiting for his super secret Keyblade insider secrets for basically the entire game. As a reminder, Eraqus’s direct quote is: “Aqua, as our newest Keyblade Master, you are entitled to certain knowledge.” Sounds like serious stuff! I don’t blame him for being excited, but he has really hyped this up.

How secret could it really be though, when the test is so easy?

“Asking himself rhetorical questions about darkness. That’s a dead giveaway the guy is going to become Xehanort.”

Now that Clickbait Boyfriend has finished Terra’s story, he’s riding high on his oracle-like power of insight. It does raise an interesting question though: CBB was super disappointed that the Xehanort Reports were less loaded with ridiculous, flowery wonderings than the Ansem Reports. Could it be that those rhetorical questions are Terra’s influence?

Not a rhetorical question

“Even if it was going to be disappointing knowledge, throw me a f#*king bone here.”

Remember that Keyblade Master Club knowledge? Turns out it was a big load of nothing. Does Eraqus anagram to The Worst? (No, it doesn’t, it anagrams to Square, ya dummy) CBB was pissed.

Actual photo of Clickbait Boyfriend realizing he wasn’t about to receive a mind-blowing revelation.

We’ve had plenty of discussions on past Clickbait Boyfriends about how time functions intergalactically in the Kingdom Hearts universe. Birth By Sleep throws yet another wrench into our fragile theories by attempting to weave the stories of our three protagonists together. However, this can lead to awkward situations, as seen here. Aqua seems to have left the Land of Departure maybe half an hour after Terra and Ventus, yet by the time she arrives at Cinderella’s Palace, both of boys have already not only visited, but completely finished their story arcs there. Did Aqua get lost in the lanes between? Is this a subtle dig about women being terrible drivers? Or does time just pass weirdly between the worlds? HOW IS THIS SO COMPLICATED? 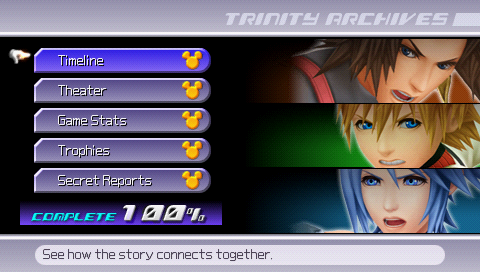 If your game needs a Timeline feature, maybe you should take a step back and consider what you’re doing.

“Ven gets rolling, which is actually useful, Terra gets a dash, which at least gets the job done, and I get a f#*king cartwheel?”

-on the downsides of the grace of a glass cannon

Just a few quotes ago, Clickbait Boyfriend was raving about Aqua’s elegant walk. Now, the honeymoon’s over. For the record, he’s being completely irrational here. Terra’s dash has almost no invincibility frames! Plus, how cool is it to cartwheel everywhere?

“Tell me that they’re going to turn into giant Heartless things.”

Sadly, Lady Tremaine and both her daughters are CONSUMED BY DARKNESS

“Aqua is looking at these people like they’re f#*king idiots.”

-on the trials of heroism

It’s tough to be in the Keyblade Master Club and have to deal with all these plebeians.

Aqua is done with your s#!t.

He did! Yet another mystery to add to the ever growing list: how does entering the atmosphere of a new world determine your size and shape?

Ewwww, the house has a Ventus infestation.

“Recall that in the movie Cinderella, the only reason this works is he’s already tried every other shoe in town. Here, this is the first house, so it shouldn’t be a dead giveaway.”

Clickbait Boyfriend seems to be completely correct here. It doesn’t make sense that the courier should quit at the first woman he finds whose foot fits the glass slipper. However, his argument has one fatal flaw. Remember the ball?

Yeah, I think he’s covered everyone who was there.

“They just got straight up incinerated.”

The stepfamily going out in a blaze of glory seems harsh, until you remember the original fairytale.

At least no one got their eyes pecked out.

Dude, Prince Charming almost thought Aqua was Cinderella. She was this close.

Next time: Sports, the Bechdel test, and OP cut-scenes!