The holiday season may be over, but making a list and checking it twice is always in season, even if it’s not festive anymore.

During all that playing, I started to notice patterns in my gaming behavior. This is perhaps an obvious statement; it would be weird to have spent hundreds of hours on a hobby and not notice something about yourself during it. But more than any love of genre, tropes, or character types, I discovered that the thing that really got me hooked on a game was its lists.

Animal Crossing: New Horizons is a game built around small tasks. Catch some fish. Catch one hundred in a row. Talk to all of your neighbors. Shake the trees until you find the hidden furniture. Deposit Bells at the bank for your loan. Check the turnip prices. Check them again. Check your fossils with Blathers. Craft all those Bunny Day recipes. Craft a fishing rod to replace the one that broke. Craft the beachside restaurant you can’t visit in the real world. Water the plants in the yard you can’t really have in the city. Visit a friend’s island with gifts and native fruit. Watch for shooting stars.

You can’t finish Animal Crossing. The list of tasks continues. Maybe it eventually falls off of your real life to-do list. 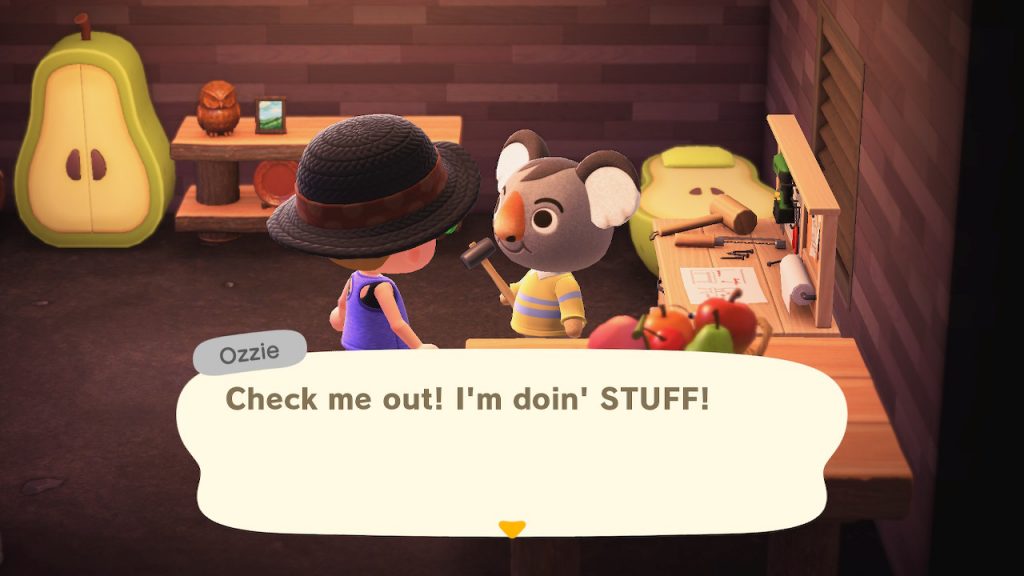 I’m not sure when I started making to-do lists. Through most of high school, I actively rebelled against using my school-issued planner, except during the fourth quarter (and sometimes a little sooner than that), when I would painstakingly count out the number of days (both school days and calendar days) until summer vacation. This anecdote makes me sound like a disinterested student at best, which isn’t true; I just did most of my homework during other classes and didn’t need to remember it for long.

The first time I remember making my now hallmark checklists was the summer before my senior year of high school. The overall goal: get through college applications. I had narrowed down my college list to eight schools, and I made hand-written application checklists for each, with alternating items in the school’s colors. I taped each of them to the wall above my desk.

I’m not sure why this was the task that turned me into a list-maker. Perhaps it was the first time I had faced something that felt truly daunting. There was no ultimate checkbox for finishing all of the lists, which would have been the most simultaneously redundant and cathartic box of all, one I would absolutely, ridiculously include in hindsight.

Each game in the Yakuza series is really just a glorified checklist. This might come across as a dig, but coming from me, it’s high praise! Usually open-world games, even contained worlds like Kamurocho, are overwhelming for me. I can appreciate the beauty of a Breath of the Wild, but it lacks the structure I need to really sink my teeth in. I would ride toward one objective, but then spot something interesting along the way and veer off-course. Ultimately, I accomplished little.

Yakuza actively rewards this style of gameplay. Head towards the flashing pink objective, but stop to check out the “?” marker of a sidequest (or seven) along the way, sprinkled with a few rounds of karaoke and multiple shifts at the cabaret club, of course. Fortunately, Kiryu (and as of my series progress, Majima and Akiyama too) keep detailed lists of the dishes they’ve tried at various restaurants, the progression of their fighting abilities, and the random folks they’ve agreed to help on the street.

Each one is too daunting for me to complete, not just because I’m unwilling to study up on shoji and mahjong. But there’s always something to do, and each time I sign off for the day, I can see what I’ve accomplished. Plus, it has the appeal of being a list within a list. Finish one game, check. Start the next, check. Maybe catch up by the end of 2021. 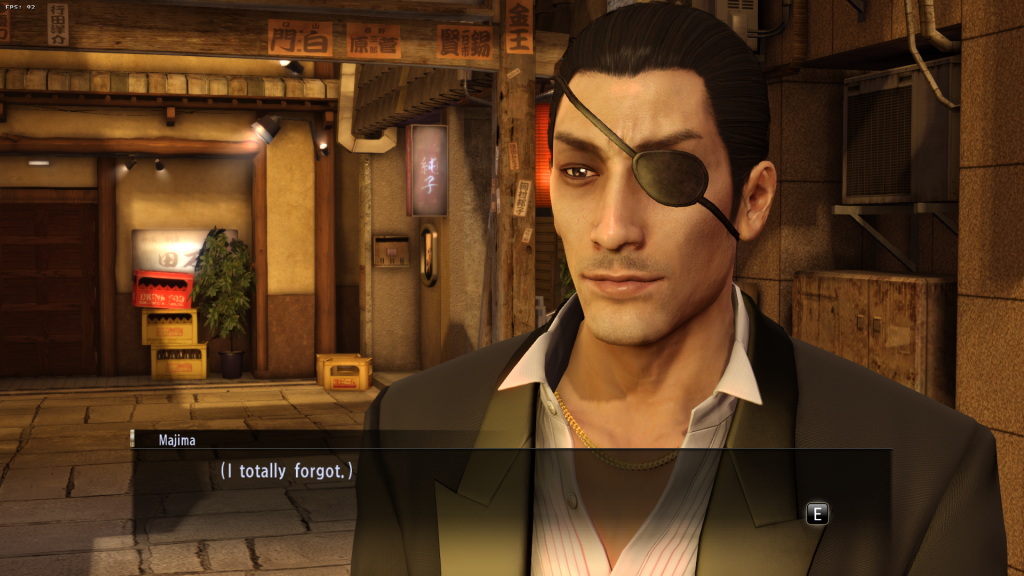 …what was happening in the main story because I’ve been playing Cabaret Club for hours.

As I moved through college and into Real Adulthood, to-do lists became my thing. I have half a dozen filled notebooks stashed away, a record of years of projects, assignments, friendships, and adventures.  I would make to-do lists for the entirety of Finals Week at once, leaving blanks to add things as they arose and always with a box for “Go Home!” on the last day. I made to-do lists when I was applying to grad school, and I made a list of tasks when I decided to move to NYC instead. Each year, I made a list of goals I wanted to achieve, events I wanted to attend, restaurants I wanted to try, and places I wanted to go that I taped to the wall and checked off one-by-one. At the end, I would scratch out the things I hadn’t done and replace them with new accomplishments and memories I couldn’t have thought of at the beginning. All boxes checked.

Kingdom Hearts: Melody of Memory is perhaps more playlist than to-do list. Clickbait Boyfriend and I still raced through it in less than a week. In real life, CBB cheerfully humors my to-do lists, but doesn’t often make his own. It was a strange delight to find both of us so obsessed with collecting stars, working our way toward the characteristically opaque ending. Just one more song. Just one more challenge. In the end, we completed every single one. Even if we’ll never be able to listen to “One Winged Angel” again. Stars across the board. 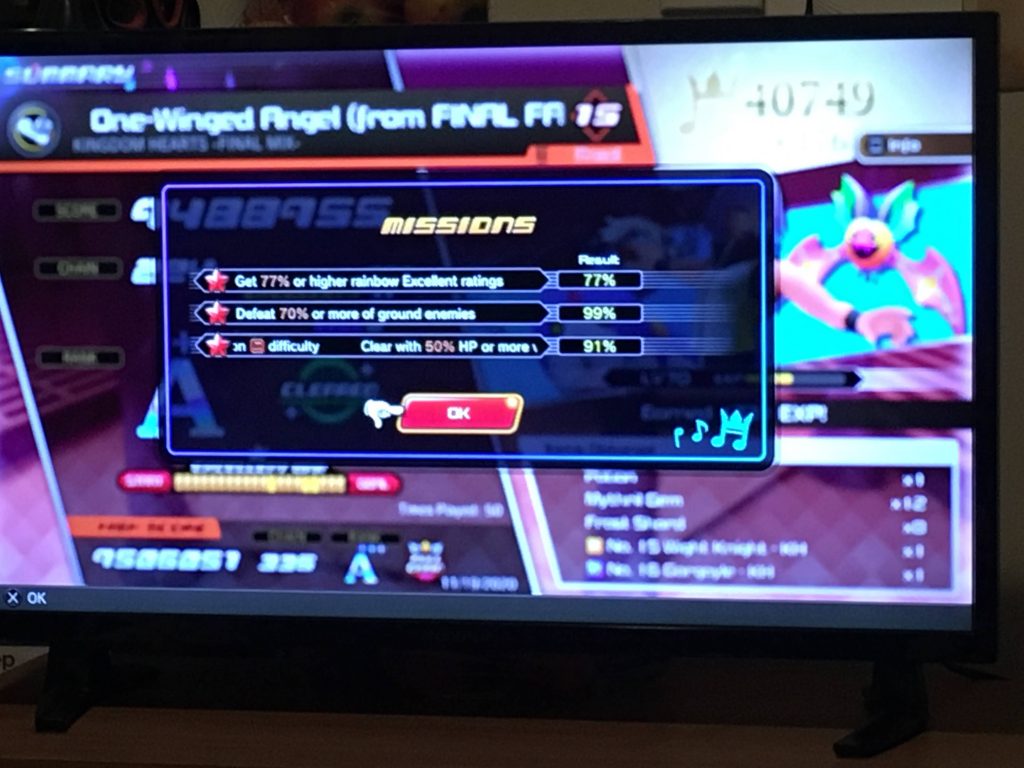 Blurry proof of our ultimate achievement

I’ve made a to-do list most days since moving to New York City. Sometimes, I make them because I have so much to do that I need a written record to keep track. In January and February of 2020, they often took up a whole page, sorted into categories. Lately, I mostly make them to trick myself into productivity. Mostly, this works quite well! Once I can check one or two things off the list, it’s much easier to get into the flow and check off more, even on the no longer numbered day in the home “office” that was once my bed and is now, blessedly, the dinner table.

I have since mostly weaned myself off of this, but from March through about July of this year, I would put playing specific games on my daily to-do list. “Play AC.” “Play Yakuza.” “Play Podcast Game,” followed by a text to Emma checking on “what this week’s game are, again?” I feel a bit of guilt about this sometimes; surely I should fight against the urge to make everything a checkbox? Surely my hobbies shouldn’t exist as items on a list to be crossed off? A worthwhile challenge, perhaps, but one best saved for after COVID. For now, I think we need all the structure we can get. If alternating between chopping down virtual trees or eating virtual ramen and catching up on tutoring reports gets the real tasks done faster, who am I to question it?

Nothing like a pandemic to push you to finish your backlog. Super Monkey Ball, Wattam, Overcooked 2, Moving Out, Return of the Obra Dinn, even Final Fantasy VII Remake, all games are that give you the satisfaction of ticking clearly defined boxes in one way or another. Most of these games otherwise have very little in common, but give me some clearly defined goals, and I’m sold. I finished eighteen games in 2020, an impressive list made possible by the other items I was able (forced?) to eliminate. I certainly didn’t attend eighteen live plays, eighteen concerts, eighteen dinners out, eighteen days exploring a new place. Despite my best efforts, a to-do list can only be so long. This year, games filled in the gaps where other impossible things had been. 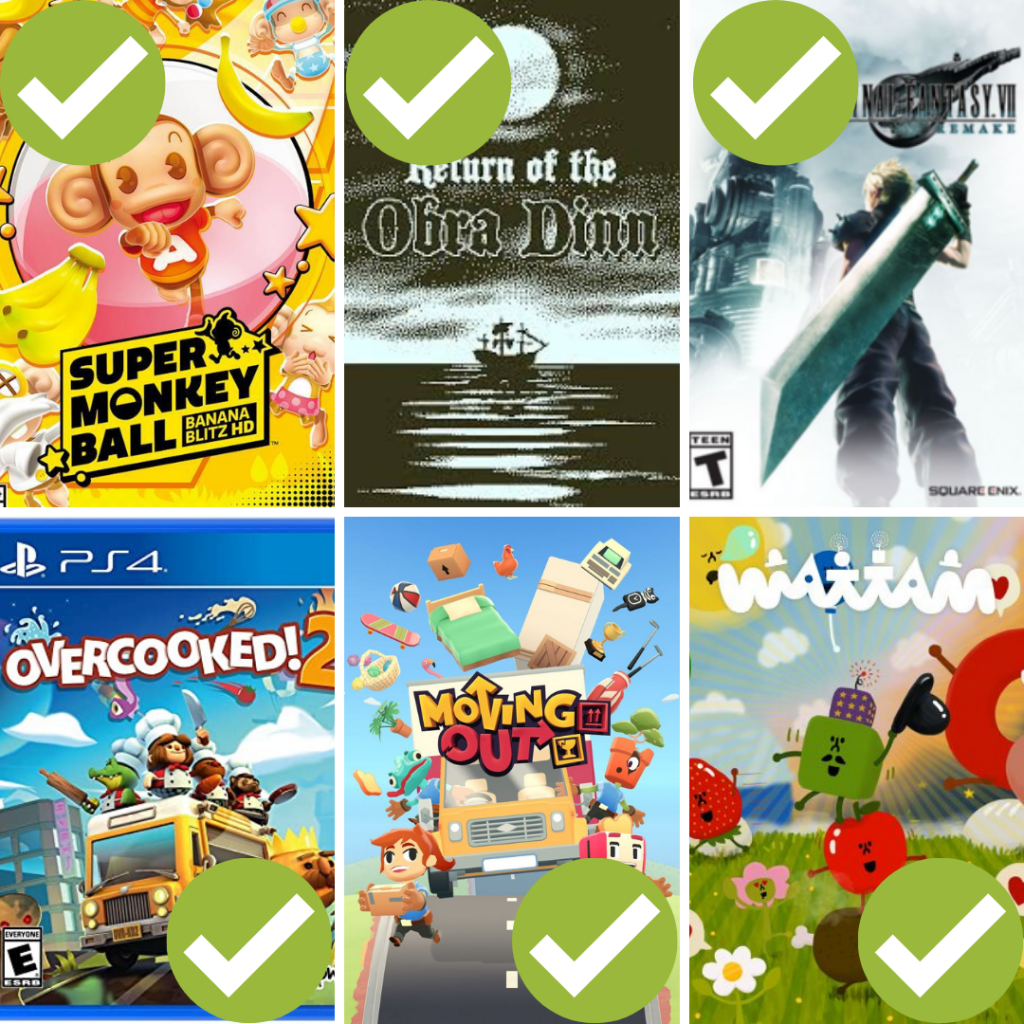 At the beginning of the pandemic, I made a Google Doc for myself and Clickbait Boyfriend entitled #PandemicBucketList, a riff on the printed ones I used to tape to my dorm room walls. This was mostly a joke (we even titled a podcast episode after it back in March), and as I added items to it, I found myself thinking that it was perhaps overly ambitious. There’s no way we’ll be able to watch all of these shows, try all these recipes, and play all these games before everything re-opens in May, I remember thinking. It was a bit melancholy at the time; you hate to leave a to-do list unfinished.

Spiritfarer is the most recent list game I’ve loved. Despite all the reviews extolling the chillness of the game, I found it hectic and just a bit stressful for the first three quarters of my voyage. It was a familiar feeling. It seemed like there was no way to keep up with watering your plants, cooking new recipes, gathering resources, and making your spirit companions happy by fulfilling their requests and checking items off of their unfinished personal lists before they go. I raced around my boat, building more structures which only added more tasks to my plate, all while exploring as much of the map as I possibly could. On top of it all, the game forced me to stop sailing at night, when there was no light to illuminate my projected map. This enforced pause was frustrating; I couldn’t even look at the map and plot a course for the following day.

Eventually, I came to welcome this breath. There was so much to do during the day, the night provided a welcome window to slow down. A chance to catch up. As I finished quests and sent spirits through the Everdoor, my to-do list dwindled. As I sailed with my last few companions, I realized that had so much wool and so many apples, I probably hadn’t needed to have rushed so much in the first place.

The ending of Spiritfarer comes quietly, almost anti-climactically. It’s not that you don’t know the end is coming; when there are no more spaces for blueprints to house new companions, it’s clear your journey is on the downhill slope. But it’s hard to know when to leave. Have you done everything you set out to do? Are there any other lists within lists to complete? When you do reach the ending, there are no big revelations. Just a slow fade to the credits, and then the title screen.

I expect the pandemic to end quietly, almost anti-climactically too. It’s not that I don’t know that the end is coming; the vaccines make it possible to see the conclusion of the journey now. But the when still feels elusive. I think we’d all like so see the credits roll, if only that were possible. Instead, the slowest fade out, hopefully, continues.

In the meantime, for 2021, I’ve started a new version of the #PandemicBucketList. There are unfinished things from the original that reappear, of course, and lots of new entries too. This time, I hope to leave it unfinished, surprised by a quicker return to normalcy than expected. I haven’t let myself start making my list for after yet…but maybe soon. For now, today’s to-do list is enough.