It’s officially the dog days of summer, which means it’s prime time for the beach! Or, if you don’t live in Miami anymore, video games! That’s right folks, the denizens of Talk This NYC HQ are spending as much time hiding in the air conditioning as possible, which means one thing: Kingdom Hearts. There’s less than six months until Kingdom Hearts 3, and we have to make sure that Clickbait Boyfriend is prepared! So crank that window unit up to maximum cool, grab a snack, and settle in for the latest edition of Clickbait Boyfriend: Birth By Sleep!

(New to Clickbait Boyfriend? Welcome! You can catch up on the full series here.

“Is this Terra and this Aqua?”

Clickbait Boyfriend was really convinced that each little colored nebula represented a different character, and that he would be exploring worlds in each one in the different storylines. Spoiler alert: this theory was not correct. He’s thinking outside of the box though, I celebrate that! Not everything is that deep.

“Wow you could easily slip out of that thing, man, come on!”

Yeah, Ventus should definitely have been able to walk right out of that trap. It is a direct callback to the scene from Cinderella. So maybe we should take our complaints up with the original animators 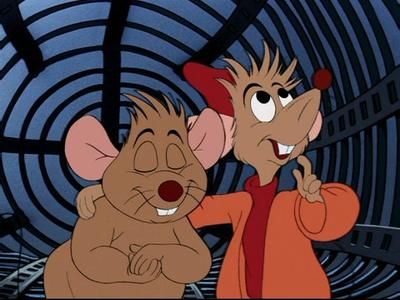 Ven’s not quite as chunky or naked as the original

“In other worlds, Sora turns into an animal. So if he’s the size of a mouse, he should turn into a mouse. So many inconsistencies.”

It’s amazing how many weird little continuity errors Clickbait Boyfriend spots that I would never have thought of. Sora has been to a lot of worlds with talking animals: Wonderland’s White Rabbit, Agrabah’s Iago, Sebastian and Flounder in Atlantica. But he only transforms into an animal in worlds like The Lion King where animals are the main characters (whatever that means). All this to say, I don’t think it’s inconsistent that Ven stays human here. I’ll admit some ambiguity though.

When are we going to The Fox and The Hound World?

“Ven and Sora have savior complexes.”

-on the need to save new friends

That’s a solid diagnosis right there. 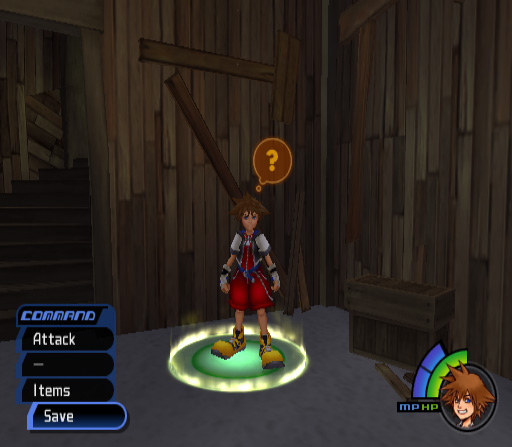 The only time Sora was confused about saving something.

“How do you sell your ability to sliding dash?”

The exchange of money for goods and, more relevantly here, services, is a foundation of our economic system. However, usually that refers to performing a service for someone, not literally selling your ability to do a thing. My only possible explanation is Moogle Magic. 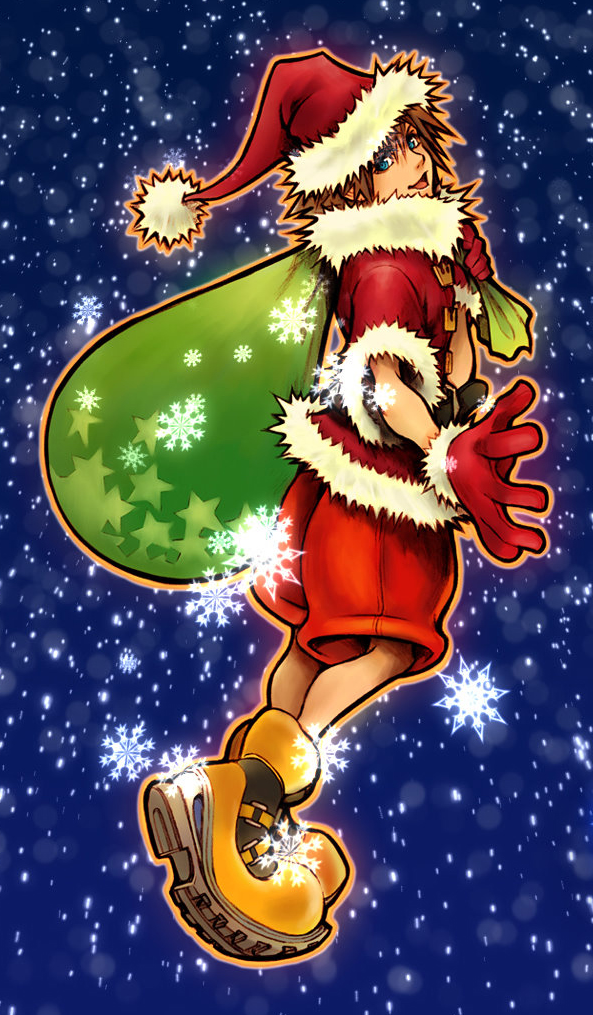 Your present this year is Scan. Hope you like it!

“Wanna know what this game is missing? A Donald and Goofy.”

I never thought the day would come that someone would wish that Donald was there to (not) save them.

-on not missing old friends

It can’t be Mickey, because he gets all of his villain gear custom-fitted.

Vanitus can really sneak up and kick your butt. 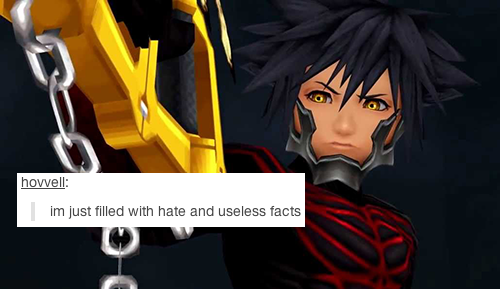 “I can mostly play through this game now and not find it strange to see Final Fantasy characters together with Disney characters, but Mickey Mouse with a keyblade still boggles my mind.”

-on adjusting to some conventions more than others

As mentioned above, Clickbait Boyfriend has a real vendetta against Mickey Mouse, which probably contributes to the continued dissonance. Mickey is the only true Disney character that wields a keyblade, so he’s walking a particularly weird line. 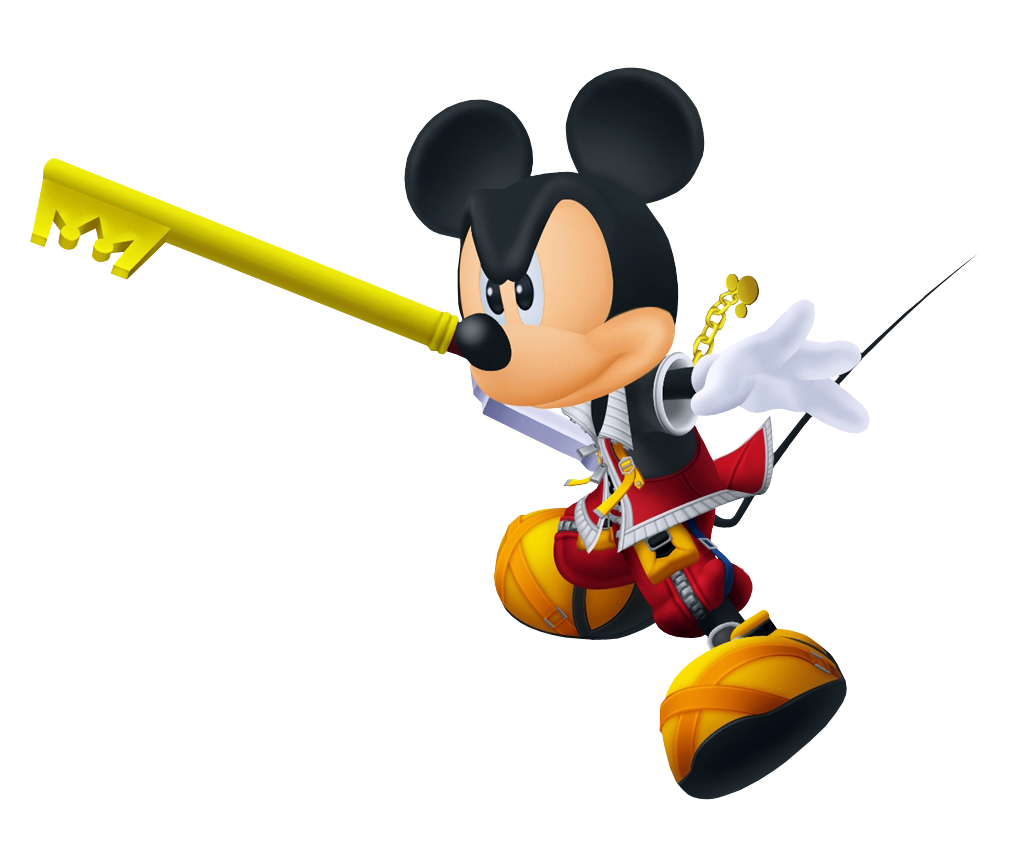 Please don’t give the mice keys to my apartment.

“Radiant Garden…where have I heard that name before?”

Come on man, it’s like the act one finale of Kingdom Hearts 2! 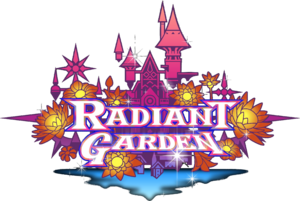 It’s got a pink logo and everything.

“I do not remember Scrooge McDuck having such a rich, deep Scottish brogue.”

I didn’t believe it either, but it’s true.

“Why would there be a place called Disney Town? Does Walt Disney exist in the Kingdom Hearts world? Can we make that canon?”

-on getting a little too meta

Clickbait Boyfriend is into it, but it doesn’t make any sense. Not that that’s stopped Kingdom Hearts before.

The character models for Disney Town Donald and Goofy. So realistic!

“I missed that music.”

-on the Hollow Bastion theme

Glad to know the Radiant Garden/Hollow Bastion orchestra kept the soundtrack consistent over a whole decade. No disco phase in the Garden’s pop culture, apparently. Here’s a metal cover though, which CBB might like:

“Did they really just get me hyped up for some Winnie the Pooh and then fake me out?”

That’s a big pile of pooh. 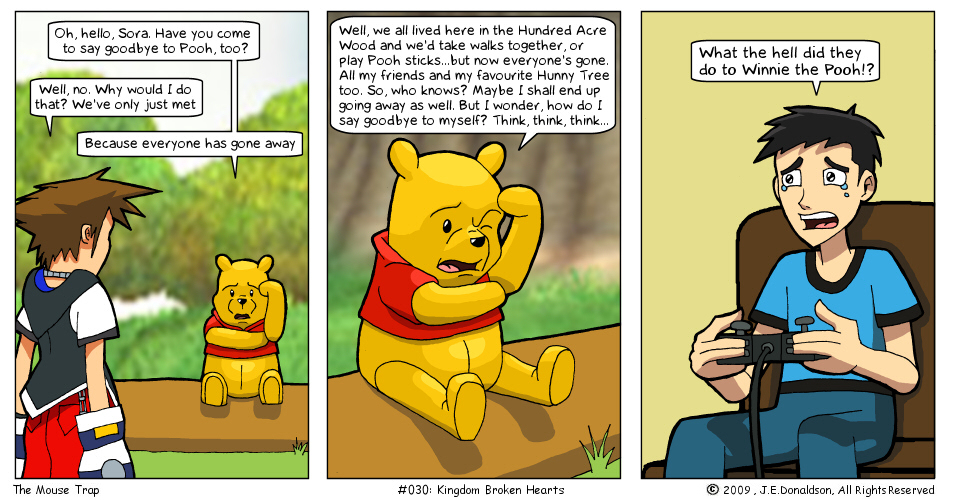 Ventus wasn’t ready for this kind of darkness.

“I know these characters must be connected to the Kingdom Hearts characters, but I’m having a hard time understanding that because they’re different…characters.”

-on trying to make sense of it all

They don’t always look different, but they are. Just keep putting the pieces together, Clickbait Boyfriend. Or at least finding the pieces.

It’s Roxas, but it might as well be Ventus.

“Did no one in this little society think ‘hm, maybe giant blunt things aren’t the best thing to fight with?'”

-on other weapon options

Evidently the answer to that question is no. Keys for the win! Wait, not that guy!

He’s not wrong. Except that I don’t think Clickbait Boyfriend would be prepared for most of the Lea/Axel fan fiction out there. It’s not all rated E for Everyone.