Clickbait Boyfriend fans, times have changed significantly since our last post, and I don’t mean that as a joke about Sora and time travel. We’re all having to take a page from our Kingdom Hearts heroes to remember that even when we’re far apart, our friends are still with us in our hearts. Gosh, that was even cheesier as a rhyming couplet, wasn’t it?

With a schedule newly free of the scrambling around the city that has characterized my 2020, Clickbait Boyfriend is back! We’ll be back to weekly postings (at least) to bring this saga to a close with CBB’s thoughts on Re:Mind. Boy, does he have some thoughts.

(New to Clickbait Boyfriend? You can read the entire backlog here!)

“That’s when we thought the Sleeping Realms started! The new timeline! Remember? With the pffff noise! Is this Nomura slyly confirming the sleeping world theory?”

-on just diving into this thing headfirst

If you haven’t already read all four-hundred-forty-three pages of the Sleeping Realms Theory, it’s as good a way to pass the time during quarantine as any. But yes, how dare Nomura start Re:Mind right at the point where Xigbar was cut off in the original game! “How dare Nomura X Y Z” is going to be a big theme of these posts.

“Is Luxu just being a silly boy and playing dumb?”

Unsurprisingly, I am still deeply confused by Luxu’s character. Throughout the opening cutscenes of Re:Mind, he makes perplexing choices that clearly give away that he’s up to something. There’s no way he’s dumb enough to be doing that unintentionally. Unless he is! Demyx has lasted this long too, and he’s not bright. 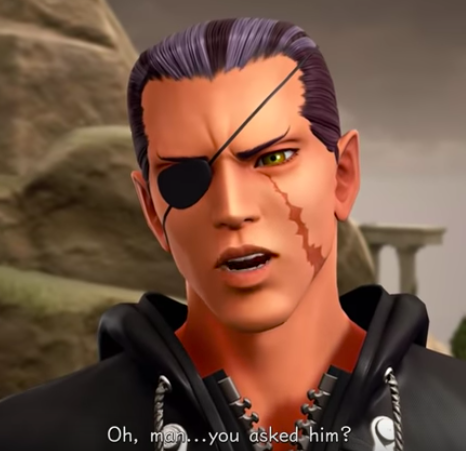 -on Luxu, an open book 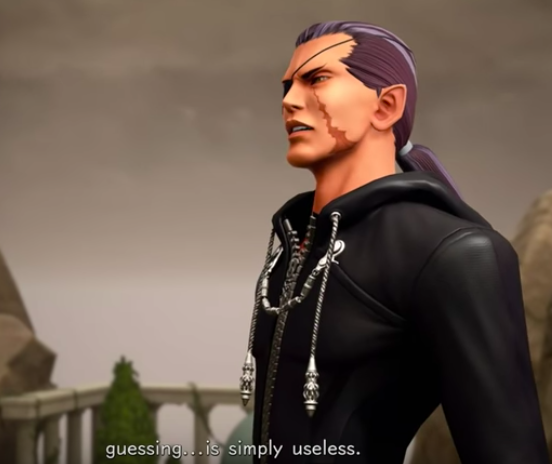 You said it, buddy.

“Looooxerd? Has anyone ever pronounced his name like that? I swear all these voice actors are just like ‘Jesus Christ, so many Xs, how do you want me to read this thing?’”

-on pronunciations we probably should have known by now, right?

I have been pronouncing it Luhx-ord this entire time, and now I feel like a fool. 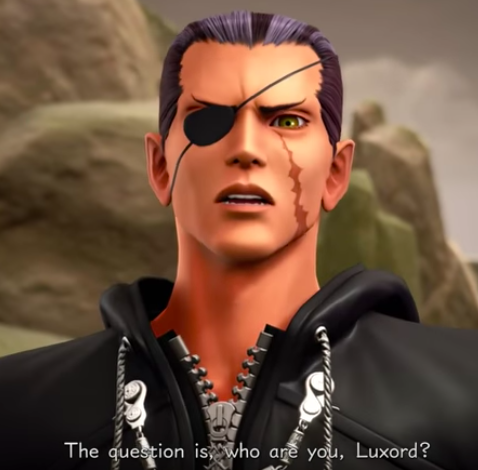 “Nothing like having a living, breathing female character as a McGuffin!”

If the next arc in this series isn’t about Kairi, Daisy Duck, and Perdita running around and saving the Disney universe, then I don’t know why we’ve tolerated the sidelining of Kairi for this long.

“Don’t feign like you care about this. Don’t pretend, Mickey”

-on Mickey the gaslighter, part 73

This scene isn’t new, but Clickbait Boyfriend’s animosity is fresh.

Mickey, Aqua is RIGHT THERE.

“Those hoods are really something! They don’t let any light through at all!”

-on the ultimate in social distance attire

No light, no germs, no problem.

“Is that the Master of Masters?”

It’s obvious that it’s the Master of Masters, but the real question is, who is that? Luxu? Demyx? PLUTO? 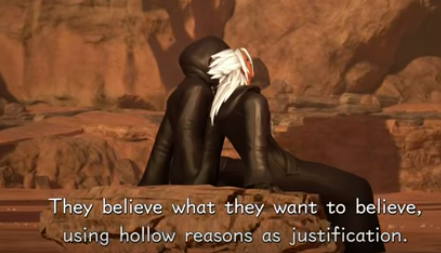 Please don’t get CBB started on the philosophical implications of this one.

“I’m just going to enunciate really weirdly and hope that some of it works out!”

It’s certainly a bold, strong choice. I know so little about the character that it’s hard to parse whether it’s an effective one, but definitely bold. 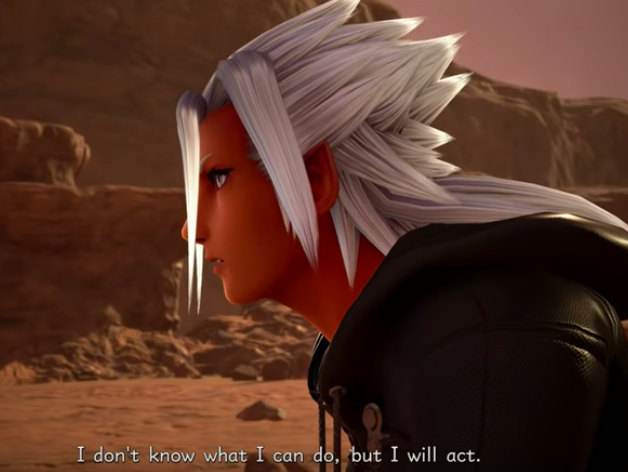 “This appears to be a flashback, because he has his Mark of Mastery coming up. Is this a flashback, or a flash-forward seeing the aftermath of Kingdom Hearts III?”

Probably, somehow, it is both at the same time.

Me, trying to give a pep talk to my test prep students about how the test doesn’t determine their whole future.

“What? Did they really just pull some BS where I’m supposed to believe that Yung Norty just heard what the Master said, but they pulled a veil over my ears and I can’t hear what he said? It’s like Nomura thought ‘how can I make every moment as unsatisfying as I possibly can? I’ve been building up some of these reveals for like 15 years and I want to make every single moment of playing this game as painful as possible for people.’”

I know we set a precedent for this in the original game with the Xigbar jump-cut discussed above, but I’m still on the same page with CBB that this is some nonsense. Isn’t there some way they could have recsripted this scene so that name reveal just cuts off at the end, as opposed to just cutting the player out of the conversation? That said, Xehanort does say in the next scene that he never found out who the man was…which is suspicious in its own right. Maybe he couldn’t hear the name either and was too embarrassed to ask the guy to repeat it? If so, relatable. 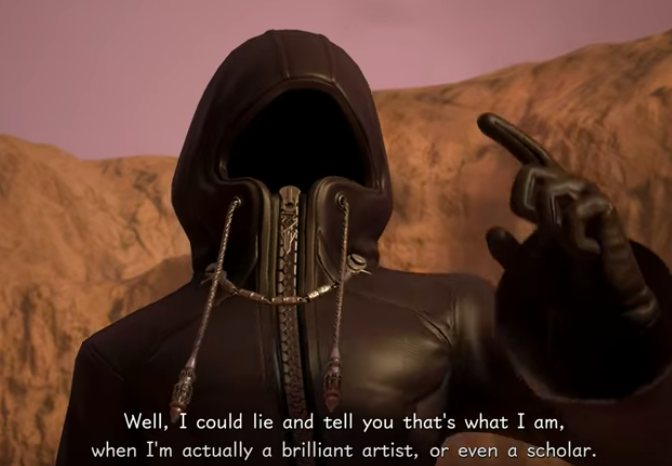 CBB and I, creating new identities for ourselves in this social-distanced future. We’re actually a brilliant artist AND a scholar but…

-on “may your heart be your guiding key”

I have three separate screenshots of people saying this quote just from the ten minutes of cutscenes covered in this blog.

“How old is Xehanort? Is he one hundred years old? Yeah! Okay, maybe in his nineties? And I’m whacking him to pieces with a blunt metal object and he’s chill about it?”

-on defying the laws of aging

The man’s forehead veins have not aged gracefully, but otherwise he’s remarkably well-preserved! 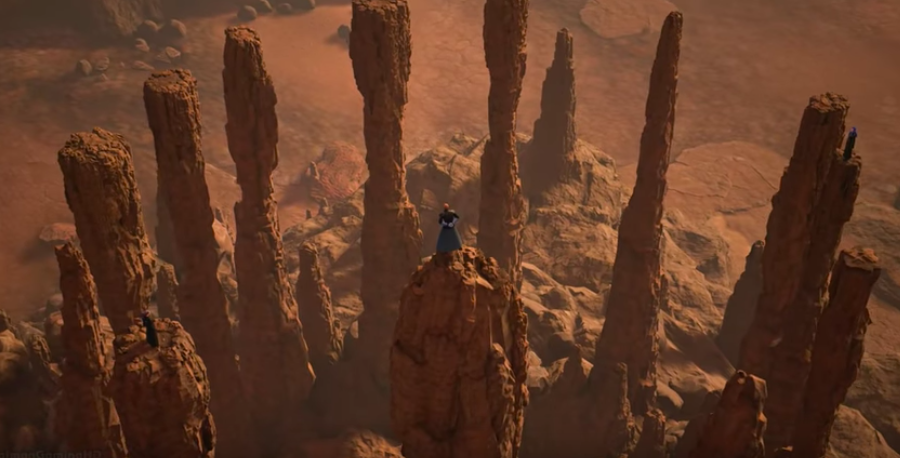 Xehanort is in a high-risk group, so very proud of Saix and Xigbar for practicing extreme social distancing

“My dude just couldn’t resist giving us a completely random array of cutscenes with no connective tissue. Do we want some sort of thematically and narratively coherent intro to the DLC? Nah. It’s fine, the players will piece it together. The players won’t have any difficulty piecing it together.”

If CBB isn’t used to this by now, I’m not sure he’ll ever be.

“…or coherent stories of any kind!”

“Does Xehanort just not care? Xigbar’s over there doing some supremely sketchy s#!t, and he’s just gonna let this one slide?”

As the leader of an organization, sometimes you have to prioritize what problems you’re going to deal with on any given day. Xehanort has already proven he’s bad at delegating since he’s turning his whole company into his heart vessels, so let him have this one slightly relaxed management philosophy. Xigbar doesn’t need to be watched all the time! Let the man do his job! 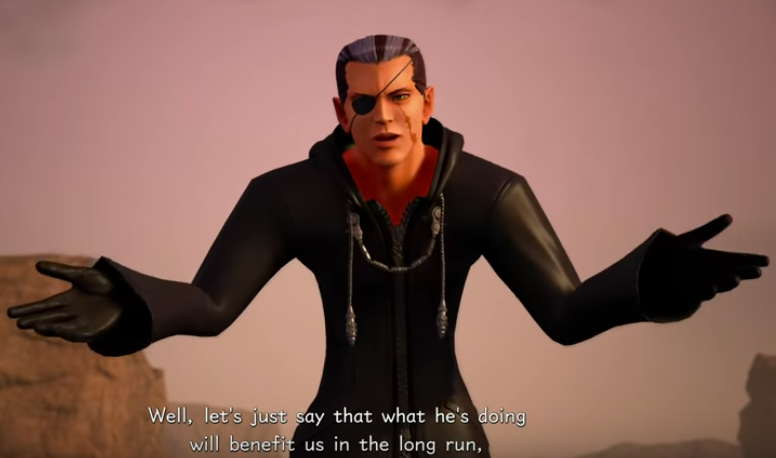 On staying inside and playing video games for the next few months.

“So the reason he’s not actually one hundred years old is because there was a time he didn’t have his body. I guess that explains it. Fair enough.”

-on reasoning I didn’t expect CBB to buy

I’m not even sure this convinced me, but if CBB thinks it’s all good, I can’t be the more unreasonable one here.

Me, three months into quaratine talking to me, myself, me, and I

“I’m trying to think of something pithy to say but I honestly can’t. A nature taboo.”

Maybe Chirithy is just avoiding having to explain the science of time-travel to a kid who dropped out of school at the age of thirteen, but nature taboo definitely implies…other things. 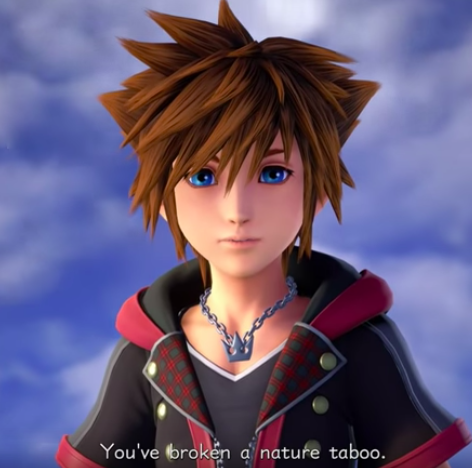 “Can you imagine if in physics, like, going faster than the speed of light? That’s a nature taboo.”

It’s a little unclear the degree to which science has advanced in the Kingdom Hearts universe. They’ve developed very sophisticated space travel, but it’s all built from gummi candies. Did aerospace engineers Chip and Dale even go to school?

Me, trying to buy Ring Fit Adventure on eBay.

Aqua and Ventus, wincing at the idiot who though kindness was an emotion.

“That sounds an awful lot like a video game DLC set up where you get to fight old fights with new characters and new abilities. It seems odd that the punishment for breaking a taboo of nature is so much like a video game!”

-on returning to the past through the hearts of your friends

It’s so convenient, isn’t it? Sometimes, the laws of the universe just bend in your favor 😉

A little Keystagram #flashbackfriday to remind you to count your blessings it wasn’t THIS kind of video game.

Next time: some actual gameplay, for crying out loud!